Gauri- “Did you keep my arthritis medicine?”

Manav- “Yes, I did. I also kept the heating pad for your back pain”

Gauri- “Remember the kids told us to not take anything essential from the house because they want to rent our house as a fully-furnished room, so be careful and if you have taken anything essential, keep it back or you know…..”

Manav- “Yes, I know, I won’t take anything from the home I built from my own two hands”

They both continue packing.

Manav and Gauri got married 40 years ago and raised three young and bright kids. They were a normal middle-class family for most of their lives. Manav ran a small construction business and Gauri was a teacher in the town’s elementary school. They never let their kids feel like they couldn’t follow their dreams because of financial troubles; they did whatever they could to support them. Each one of them went to a renowned university, got married and had a family of their own.

The couple was very diligent in putting away a part of their incomes as savings for a secure and independent retirement. They did not want to burden anyone. They seemed like the perfect little family, but then the family was struck by series of disasters, all rolling in, one by one. The elder son had a gambling problem and he gambled away all his money, including his house. The younger son’s firm filed for bankruptcy and he lost his job. The daughter’s practise was hit by a law suit which caused immense financial loss to her. Like the ideal parents, Manav and Gauri offered to help each one of their kids with money, they knew this will drain their savings, but they did it anyway. They also took a mortgage on their house and didn’t tell anyone.

Slowly all the kids started getting back on their feet and got busy with their lives again, but in the process, they forgot about the parents who helped them..

The couple started to have financial troubles of their own; they could barely make the ends meet. They could not make mortgage payments and the bank had threatened to take their house way on more than one occasion. Manav had a lot of pride to ask his kids for money, but this problem was not going away, he had retired and their savings were gone, so after a lot of deliberation, they arrived at a conclusion that they would ask their kids for some help, but to their dismay, all three kids refused to help them, giving some vague reason as to why they couldn’t help.

Manav and Gauri were devastated. They raised their children with values and morals. They helped them out in every way they could. They knew the kids had means to help them but they were just reluctant to do so. There was no light at the end of this tunnel.

The bank threatened to take away the house in fifteen days if the mortgage payment wasn’t met. Manav was too scared to ask for help again because he feared if they refused again, it would crush his heart. But Gauri secretly asked the younger son to just help with the mortgage payment so that they can keep a roof over their head, she cried over the phone talking to her son. He said he would figure something out and they should not worry. His solution was to send Manav and Gauri to an old age home and rent the house through which the payment of mortgage could be made.

The door opened and Manav and Gauri came out with a suitcase in their hands. With a heavy heart, they looked at their house for the last time and sat in the cab. Manav told the address to the driver and asked: “Could you drive through downtown?” The driver told them that it was not the shortest way. “I know, but there is no rush, as we are on our way to a shelter home. We have no family left”. The couple had tears in their eyes.

When they reached the old age home, they were greeted by several old men and women. Both of them were seated in the garden surrounded by others.

One of them asked, “What brought both of you here? Did you not have any children?”

“We have three children but probably they forgot that they have parents.” said Manav with his throat choked.

While Manav wailed inconsolably, Gauri went on talking, in a voice that was cold and piercing like a shrapnel, “I gave birth to the three and see what they did? They forced us out of own home. They are all well-settled financially. They have got everything for themselves, but nothing for us. They have forgotten how we spent our entire life for them.”

“I can understand the pain you both are going through. All of us here have experienced it at some time or the other which brought us here.” said an old woman sitting next to Gauri.

Today the definition of family is transforming from all-inclusive to “me, my wife and my kids. Old parents become a burden for them.” said another old man who listened to their conversation with a stone-cold face.

“But that does not mean that we cannot do anything.” came another voice. “We are weak but not completely helpless. We have recourse to the law.”

“Now at this age, you want these weak bones to go to the courts and die even before the case is settled. With no money even for food, from where we will afford the hefty fees of the lawyers.” said Manav in a disapproving tone.

“Things aren’t the same anymore. We are no longer supposed to go to the courts in order to get what is our right. We just need to take the first step.” said an old woman. 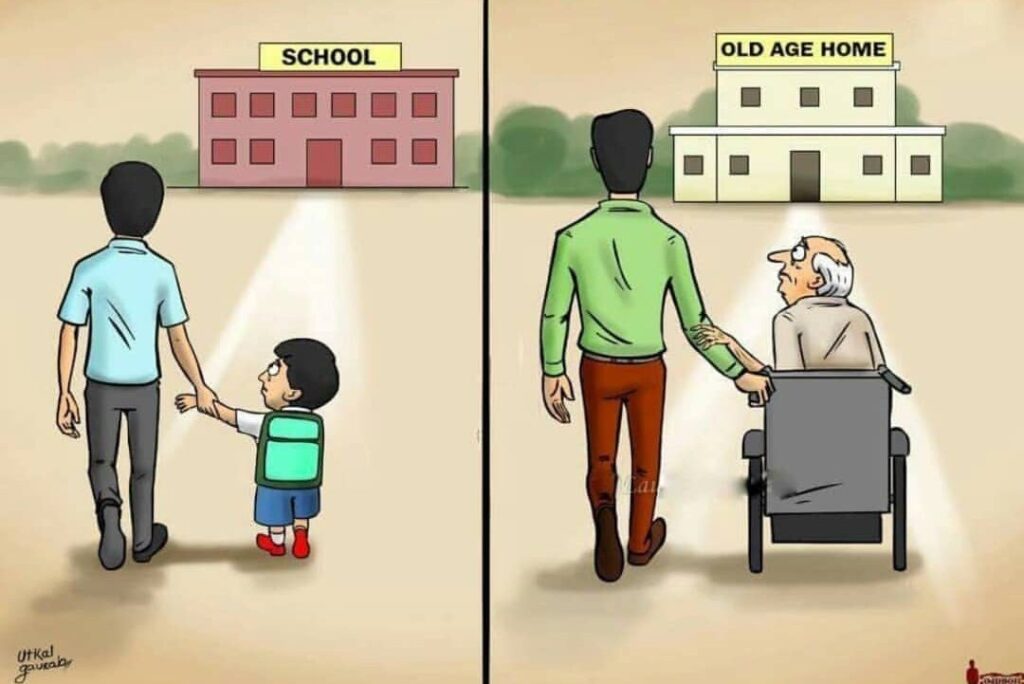 “Provisions have been made in the Constitution of India to preserve the rights of those aged above 60. Since these articles are part of Chapter IV of the constitution which corresponds to Directive Principles, they cannot be enforced by a court of law as stated in Article 37, however, they are the basis upon which any legislation is drafted.” she explained.

Article 41 of the Constitution secures the right of senior citizens to employment, education and public assistance. Meanwhile, Article 46 asserts that the educational and economic rights of the elderly must be protected by the state.

The Maintenance and Welfare of Parents and Senior Citizens Act, 2007 Act was enacted to ensure parents and senior citizens are given basic amenities. The act under Section 2(b), defines maintenance as including provision for food, clothing, residence, medical attendance, and treatment. Unlike claiming for maintenance under Section 125 of CrPC wherein the senior citizen will have to approach the Court bearing expenses to file and litigate suit and spend a lot of time, under MWPSC Act, the process was made simple. Parents and senior citizens may claim for maintenance only under one of these statutes. The Act makes it mandatory for children or legal heirs to provide the basic amenities to their parents or grandparents (or senior citizens). Maintenance Tribunals have been established to ensure the implementation of the law.

The Tribunal may, during the pendency of the proceeding order children or relative to make a monthly allowance for the interim maintenance of such senior citizen including parent and to pay the same to such senior citizens including parent as the Tribunal may from time to time direct. Monthly maintenance of up to Rs. 10,000 can be awarded and the children or relative should deposit this within 30 days from the day of the order by the tribunal. Senior citizens can also revoke transfer of property in case of negligence by relatives. The failure to comply with the maintenance orders issued by the Tribunal can also attract imprisonment.

Section 17 of the Act states that no party to a proceeding should be represented by a lawyer while parents or senior citizens may avail the services of the Maintenance Officer appointed by the State Government.

“There are also various provisions to facilitate us in or day-to-day lives apart from the maintenance act.” came another voice.

As per rights guaranteed under the National Policy for Older Persons, 1999, all Indian citizens aged above 60 are entitled to a 30 per cent concession in ticket prices while travelling with the Indian Railways. The concession is 50 per cent for women aged above 60 along with the provision for separate counters and other services including berth requests.

While different religions have varying laws in place to protect the interests of senior citizens, some are very particular such as the statutory provision for maintenance of parents under Hindu personal law contained in Section 20 of the Hindu Adoption and Maintenance Act, 1956. Similar laws are found in Muslim laws, Christian laws, and even Parsi laws.

Section 88-B, 88-D, and 88-DDB of the Income Tax Act of India allow senior citizens to claim a discount in tax. The elderly is also entitled to get higher interest on tax saving plans apart from having a wide variety of LIC policies and post office saving schemes to choose from.

“But how can I go into a legal battle with my own children. Even though they have forgotten to care about us, we can’t do the same to them.” said Gauri at last after listening to the people surrounding her. “Even I felt that I could never go against my children but your necessities force you to take legal recourse and make them realise their duties.” Said an old man.

“Manav and Gauri, you should file an application. We are all there to support you.” came distinct voices.

With a deep sigh said Manav, “I wish they would have understood it on their own that we are not a burden but their responsibility. We will get the money for maintenance but I hope we could also get the love and respect from our children. We could get the warmth of our home and live together as one family.”