Skip to content
No Comments on Child Marriage: Snatching Away Dreams from the Eyes of Millions
– Raja Reeshav Roy and Bhavya Kansara Posted in Blog Post By LAAC, NLUJPosted on May 11, 2021October 21, 2021Tagged #childmarriage, #childrights, #saynotochildmarriage

It was yet another scorching day of April, in a small village not too far from the capital of Rajasthan, when Anandi came running to her home with the biggest smile on her face and with great enthusiasm told her parents that it was the happiest day of her life. The indifferent father asked her the reason behind the excitement, answering to which Anandi slowly took out a certificate from her bag and showed it to her parents and said that she has secured second position in class 9th in the entire Bhilwara district. Her parents smiled a little, which appeared to be a mere formality and just to keep her heart for what they were about to tell her. The mother hesitantly told Anandi that her father had matched her a fix and they were planning to marry her on the occasion of Akshay Tritiya, which is considered to be the most auspicious day for solemnizing child marriages.

Anandi was a 14-year-old lively young girl who had the aspiration to make something out of herself and dreamt of a life bigger than what her parents made her live. She was one of the brightest students, not only in her school but also in her district. However, little did she know that her fate had already been determined by a repressive age-old practice that continues to temper the lives of many Anandis in different parts of our country. She belonged to a poor family from Bhilwara, Rajasthan. Her family consisted of her father, mother, elder brother and her grandma. Anandi’s father was a small farmer who was trapped into a vicious circle of debt and poverty. He wanted to transfer the burden of raising a girl as quickly as possible and, therefore, being crushed under the fetters of poverty, he decided to get Anandi married to a 27-year-old man in exchange for a bride for his elder son. This popular practise of exchanging a daughter in return for a daughter-in-law is called Atta Satta and it is very prevalent in various communities of Rajasthan.

Tears rolled down her eyes as her mother narrated her fate and she ran to her room hoping that all this was just a nightmare. She then went to her mother and begged not to do this to her and confessed about her dream of getting educated and becoming a doctor. Anandi’s mother, who was also married at a young age, understood her plight as she knew about the agonizing pain of dreams being crushed under this archaic tradition. She could not see her tears and, therefore, decided to stand up against this deep-rooted patriarchal evil so that her daughter could carry on with her education. With the courage of the size of a boulder, Anandi’s mother requested her husband that they should not get Anandi married at this age and instead they should give her a chance to fulfil her aspirations. Her Bapu got furious listening to what Anandi’s mother just proposed and blatantly shot down her request warning her to never bring this up again.

A month passed and the next academic session was about to start, but her parents didn’t allow her to join class 10th in the anticipation of her marriage. As luck favoured, one day Guddu Bhaiya came to visit her. Guddu Bhaiya was her first cousin and had just started practising law in Rajasthan high court after graduating from a law school. He met Anandi and while conversing with her, Anandi’s mother broke the news of her marriage. Guddu Bhaiya was shocked to hear this. He tried to talk to Anandi but his aunt interrupted the conversation by emphasising on the fact that Anandi does not have any say in this. Anandi’s mother said that their decision was full and final and there should not be any further discussions on it.

Later that day, Guddu Bhaiya somehow got a chance to interact with Anandi and again asked her about what she wants to do and Anandi broke down in tears this time. She told him about everything she has been going through since April, starting from the day she secured 2nd position in the 9th standard to how she is being forced to marry a man who is more than a decade older than her. She told him about her dream of becoming a doctor. She further said that even if she is not the brightest student, she knows that it’s illegal to marry a girl before the age of 18.

Guddu Bhaiya was happy to hear this and said “Shaabash Anandi” and added “I will make sure that you will not be married against your will and also until you complete your studies.” He then talked to his aunt and uncle and explained to them about the legal, social, physical and mental aspects of child marriage that a young soul has to face.

Guddu Bhaiya tried to explain how early marriages can have a dreadful impact on the lives of young girls. At a young age, when a girl should be given the freedom to play and build her career, this evil practise of child marriage snatches her childhood and shoulders her with the responsibility of looking after her family, and raising kids. She loses her freedom of expression and is expected to follow what her husband orders her. This way, child brides are more likely to become victims of torture, abuse and exploitation at the hands of their husband and in-laws. Even if she tries to raise a voice against this torture, she is suppressed by her own family who tries to justify this by saying that there is no harm in a man beating his wife.

Guddu Bhaiya also explained how such kind of violence adds to mental trauma and leads to depression and anxiety which often becomes lifelong trauma, thereby, impacting the mental health of that girl badly. Not only this, when a girl is married at an early age, it also tends to affect her sexual health. Due to a lack of awareness and access to modern medical facilities to avoid or postpone pregnancy, she is exposed to early and multiple pregnancies before she is even physically mature and psychologically ready to give birth. Early pregnancies lead to greater health complications among young girls and, therefore, the infant and maternal mortality rates are also higher in these situations. Poverty and illiteracy are the root causes of child marriages and these early marriages can, in turn, lead to a perpetual cycle of poverty. Guddu Bhaiya adds on to say that keeping in mind all these aspects, we have several laws in place which prohibits Child Marriage in India and if any person is found to marry off a young girl, then he shall have to face severe legal consequences. 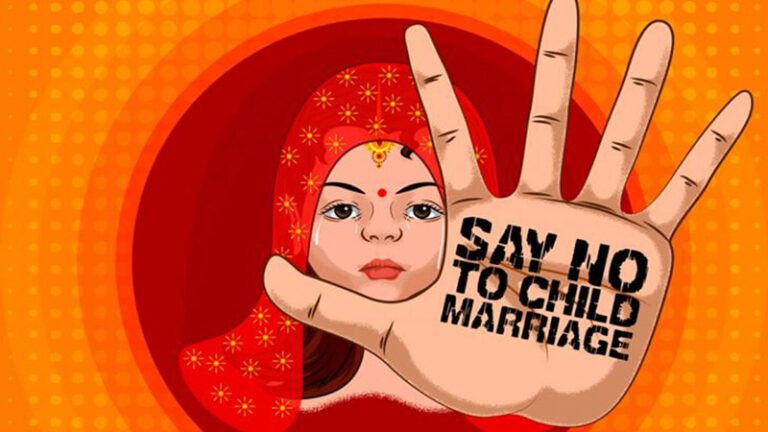 Guddu Bhaiya was finally able to convince them after much persuasion. Anandi was lucky to have a Guddu Bhaiya in her life, even if not for Guddu Bhaiya, Anandi was a bright and a self-aware girl and she might have found some other way to escape from this misery, but all our sisters and daughters are not Anandi. There are lakhs of Anandi in our country. As per the data of UNICEF, One in three of the world’s child brides live in India and of the country’s 223 million child brides, 102 million were married before turning 15.

Today we have to take a vow that we have to be someone’s Guddu Bhaiya or if not Guddu Bhaiya, we have to memorise the lessons of Guddu Bhaiya by heart so that no other Anandi in this country has to face this misery. Child marriage is not only a violation of human right, but it is illegal and irrational as well, it further completely destroys a young soul in most cases. If we truly want to emerge as a Vishwaguru we have to keep our women safe and happy in every possible sense and child marriage is one such menace present in our society that has to be done away with as soon as possible.

Child Marriage: Snatching Away Dreams from the Eyes of Millions
– Raja Reeshav Roy and Bhavya Kansara